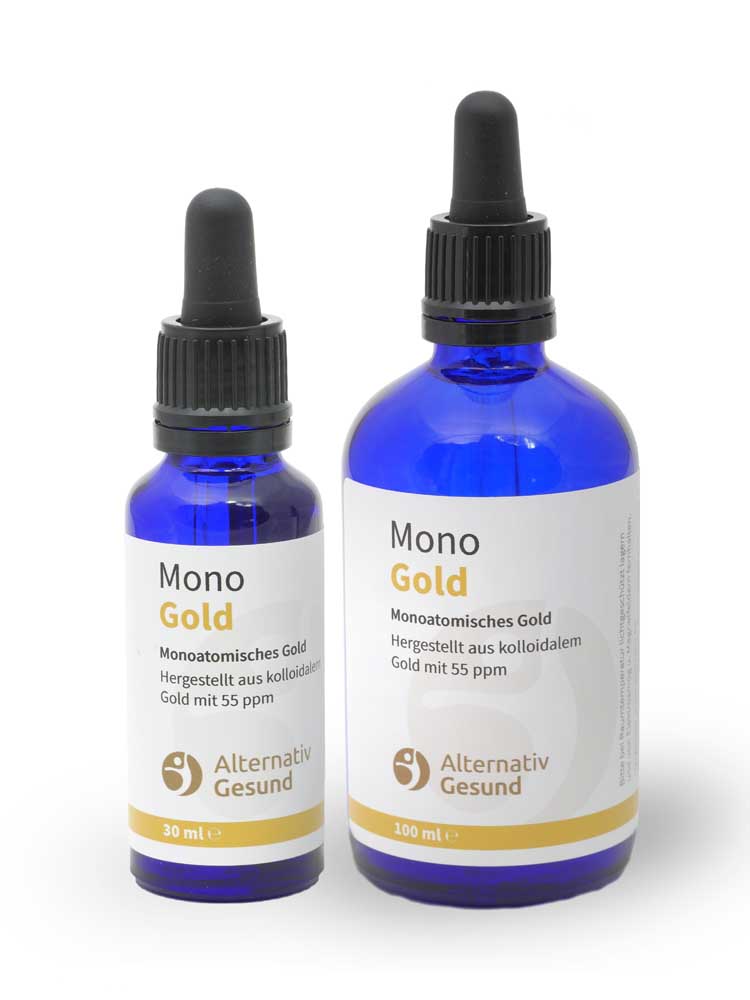 How would you feel if you didn't get upset so much anymore? Because you feel more balanced inside. What if you felt good for no reason? If you could find quicker and easier solutions to the challenges of life?

Our monoatomic gold is made from colloidal gold with a concentration of 55 ppm. It contains only pure gold particles in double distilled water and is free from additives and preservatives.

The content of the light-protective blue glass bottle is 30ml or 100 ml. You can choose the quantity above, under the price.

Monoatomic gold has a positive influence on mind and soul. This is precisely described in our eBook "Colloidal minerals, colloidal oils and monoatomic elements". It was thoroughly revised in 2020 and has 98 pages. You can download it directly here: Ebook-on-colloidal-minerals-and-monoatomic-elements.

Monoatomic elements are not to be confused with colloidal minerals, but are made from them. Monatomic gold has a different aggregate state than colloidal gold. Monogold works on an immaterial level, colloid gold works on a physical level. A comparison table can be found here.

Like the colloidal minerals, monatomic elements can also be used in a variety of ways:

Human beings develop their consciousness and their mechanisms of action over decades. Monatomic gold can accelerate this process. This requires some time, since behaviour patterns have to be solved first. Every human being makes his own experiences with monatomic gold.

Monatomic gold can help you to improve your manifestation power. That means to realize what you wish and consciously think.

The ancient Greeks already knew this. If soul and body correspond to each other, spiritual clarifications and further developments can be followed by the healing of physical suffering. Therefore it makes sense to extend the limits of consciousness, also for your physical health.

In addition to its superconductivity, monoatomic gold also has the property of creating a zero point field. This corresponds to the Mer-Ka-Ba, a light body that can be generated by counter-rotating star tetrahedra. Thereby energetic light bands are visualized.

It's all Greek to you? Never mind: Mer-Ka-Ba is basically an energetic meditation technique of consciousness that used to be explained only to initiates, but can now be learned in seminars. I practice it myself and am amazed at my manifestation power and the many improvements in my life. The thought can become reality.

If you do the Mer-Ka-Ba meditation, you will experience: the ability of our consciousness to manifest states and events mentally improves. Apparently, Mer-Ka-Ba even has an effect on our DNA. The parts of our being - body, spirit, soul - merge with each other. They are brought into unity. You can support this by taking monatomic gold. 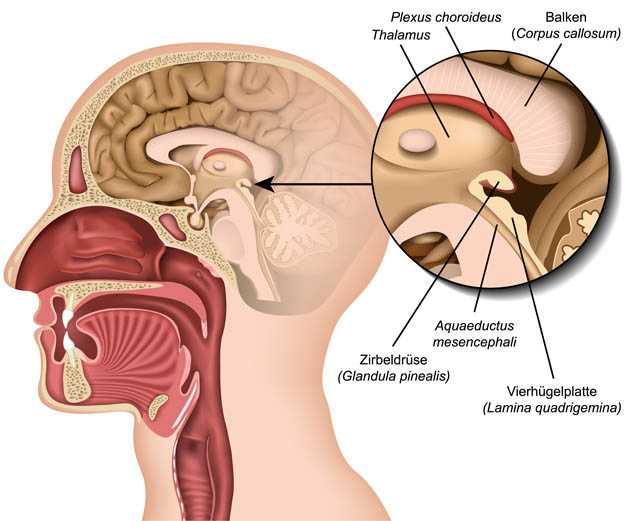 One reads and hears in many places: The pineal gland (epiphysis) is degenerated and increasingly calcified in most people. The epiphysis is the central control of our hormonal system: it produces the hormone melatonin which is primarily responsible for good sleep, immune system, rejuvenation, remedy against winter depression, etc. Taking melatonin is now regarded as an all-rounder and has a real boom in the USA.

When the pineal gland is stimulated, the entire hormone system benefits. This can be seen as the interface between mind and matter. This is why hormonal disorders can have such a significant effect on the psychological level.

By taking melatonin for better sleep one can partially "replace" the pineal gland (hormone replacement therapy). This has the disadvantage that one "does the work" for the gland - it can degenerate further because the hormone is supplied from outside.

It is better to stimulate the gland itself with monoatomic gold. Then it can perform its various tasks as a control centre. Many meditators consciously direct energy to the epiphysis in order to increase their consciousness.

The epiphysis is also said to have subtle effects: Orme in alchemy describes the monoatomic state of metals. This state is very different from the simple metallic state:

The term "orme" was coined by David Hudson, a farmer who researched and invested a lot in the field of monoatomic elements. In 1989 several patents were granted to him, e.g. in Great Britain. Orme is an acronym for "Orbitally Rearranged Monoatomic Elements".

Alchemy tried to turn base metals into ormus gold. Eckhart Tolle writes in his book The power of Now: "Persistent conscious attention cuts through the connection between the pain body and your thought processes and triggers the transformation process. As if the pain becomes the fuel for the flame of your consciousness. It then shines all the brighter. This is the esoteric meaning of the ancient art of alchemy, the transformation of base metals into gold or suffering into consciousness. The inner division is healed and you become whole again."

Ormus monoatomic gold can support you in this process of consciousness.

Monoatomic gold is intended for long-term use. It is therefore recommended to take it for several months. Give your emotional and mental body time to let go of old patterns. The effects can be noticed after a few weeks or months.

Monoatomic gold is about making the unconscious conscious. The history of monoatomic gold

Monoatomic gold was already produced by the ancient Egyptians according to a top secret alchemy process. This process took place in several stages. High-grade gold was put into a monoatomic state of aggregation. Then it was dissolved in order to cause clumping and subsequent precipitation. Finally, a pH neutralization was executed.

The Bible speaks of "manna", the "bread of the wise". Monatomic gold is also called manna. This is an elixir that is produced in an alchemical process. Manna differs from the metallic state of gold and is said to have an influence on DNA. It is called activation of the DNA potential. In contrast to the metallic properties, here you have the spirit and soul of gold.

Today, there is a special electrophysical process to produce monoatomic gold of the highest quality: proton resonance. You can find out more about this on the page Colloidal minerals.

Thanks to the Internet, more and more people are getting to know the wondrous possibilities of monoatomic elements. The sensational properties have been confirmed by various bioenergetic test procedures: Kinesiology, radiesthesia and RAC pulse palpation.

Customer reviews for "Monatomic Gold"
From: Kash Irfan On: 29 Mar 2022

Strong Impact on the mind as well as other areas

Sooo good for your body and mind! Excellent. Thank you!

Evaluations will be activated after verification.
Colloidal Gold Oil