"Harmonics" has its root in the Greek verb harmonikós, which can be translated as "join and arrange". The basic idea of Pythagoras is: "The whole universe is harmony and number". Here one must take into account that the Greek word harmony also means "octave", i.e. the musical interval, which - repeating itself from depth to height - contains all tones.

The Pythagoreans carried out their investigations with an instrument called Monochord, on which one or more strings were stretched over a length of 1.2 m, which could be tuned like a guitar. On the monochord one could move the bars freely and measure the different lengths.

With this device they were able to prove exactly that there is an integer ratio of side lengths and frequencies, i.e. tones. So they found an exact correspondence between a mathematical relationship and the human sensory organ ear. Today the sensory organ is regarded as something very subjective, according to the motto: "It is in the eye of the beholder" - but suddenly we discover that the impression of harmony is in accordance with a mathematical law.

Just as the ratio of 1 to ½ (or 2 to 1) results in the doubling of the number of oscillations and therefore the same note of the next octave, so the intervals between the fundamental and the other notes of an octave also consist of such mathematical ratios. For example, the interval of the fifth can be found at one third of the string length - the whole string behaves to the longer part of the string in a ratio of 3:2. All other notes of the western well-tempered tuning also consist of such mathematical ratios:

The basic idea of Alan Baklayan was that the meridian system of the body should also consist of such integer ratios. He first found a method to find the basic meridian frequencies. This is where the 24 frequencies of the Golden Stream program and its further development, the Diamond Shield program, come from. There are twelve major meridians - and there are 12 notes within a musical octave.

Chinese medicine has known for thousands of years that the flow of energy from one meridian to the next follows an exact sequence. This is known as the "Chinese circadian rhythm". In the second step Baklayan defined the frequencies of the starting point and the end point of each meridian so that the frequency spectrum of each meridian could be determined.

This frequency program corresponds to a whole body acupuncture and is stored on the Zapper Diamond Shield Crystal, but also available as a LINK chipcard for use with all Diamond Shield devices.

The circadian rhythms of TCM 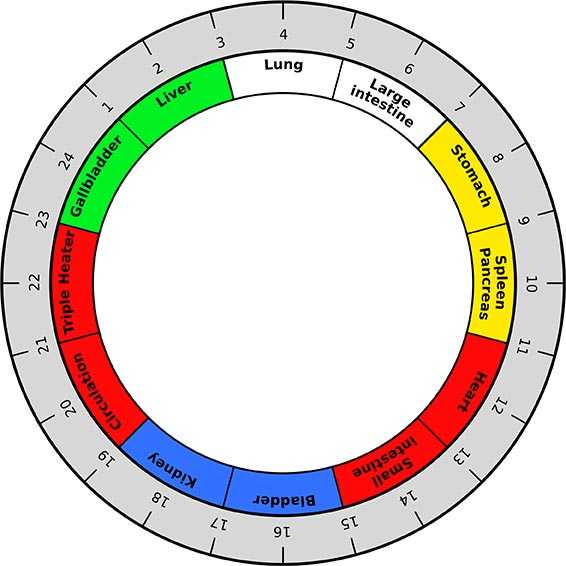