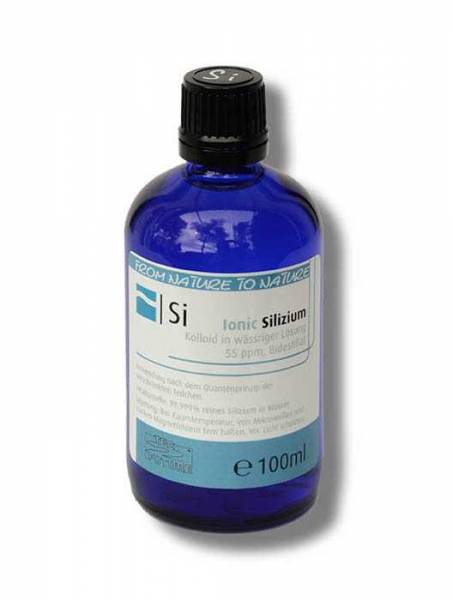 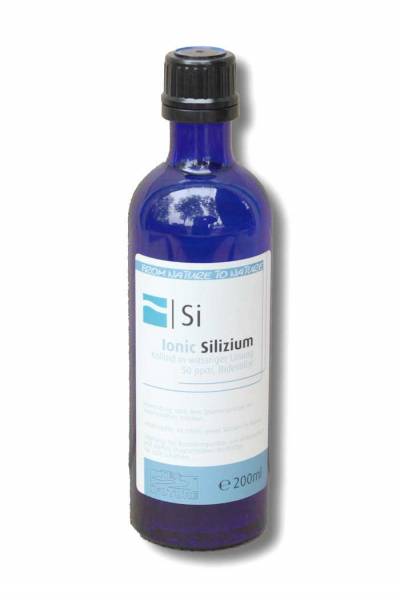 Silicon in the body

The human body contains about 1-2 grams of silicon. It is therefore the third most common trace element in the organism after iron and zinc.

The quantity decreases with increasing age. In contrast to the bulging, elastic baby body, the body of the aging person becomes increasingly wrinkled. The bones shrink, the skin slackens and becomes wrinkled, the hair becomes thinner, the nails more fragile. You can counteract this with colloidal silicon. It is the colloid of beauty and youth.

Silicon is essential for humans. However, it cannot form itself, but must be taken up with food and/or supplements, preferably in its colloidal form. The body needs silicon to build and maintain

Why silicon in colloidal form?

A large part of the silicon that is ingested through plant food (e.g. nettles and horsetail) passes through the digestive tract and is excreted through the kidneys and intestines without being ingested by the cells. This is because the molecules are very large. Bioavailability is therefore quite poor.

Also the processing of the silicon-containing food is to blame for the fact that we take up too little silicon over the food. Example: in the production of most cereal products (except whole grains), the husk of the grain is removed although it contains a lot of the important trace element.

In nature, silicon hardly occurs isolated, but mostly bound to oxygen. Silica terra is the best known form of silicon absorption. However, due to the size of the molecules, our cells can only absorb about 5% of the silicon supplied.

In colloidal silicon, however, the particles are about 10,000 times smaller. Thus the trace element can be almost completely absorbed, it has a high bioavailability.

The following symptoms can occur with a lack of silicon:

By blood analysis of the minerals you can determine how your silicon status is. Silicon makes a decisive contribution to what we look like. Beautiful hair and nails, stable connective tissue and firm skin are the wishes of many women. With colloidal silicon they can achieve this efficiently. Silicon makes beautiful!

For skin problems and cellulite you can apply LINK colloidal silicon oil externally. Silicon fills wrinkles in the face and tightens the neck and décolleté. It makes the connective tissue more stable and thus works against cellulite.

But also the organs need silicon. That is why taking colloidal silicon is not only good for beauty, it is also a cornerstone of health. Silicon as an element

Silicon is (after oxygen) the second most abundant element in the earth's crust, accounting for about 25% of it. As silicon oxide it is the main component of many minerals, e.g. quartz, rock crystal, amethyst, agate, jasper and opal. Together with other metals, it forms silicates, which in turn are constituents of minerals such as mica, feldspar, asbestos, clay, slate, etc..

Numerous plants such as horsetail and bamboo contain silicon dioxide, which gives them additional stability for their growth. Silicic acid is the name given to the oxygen acids of silicon. Silicic acid can be found in all waters, also in drinking water - as well as in all animal and vegetable body fluids.

Microorganisms in the soil ensure that minerals such as silicon are provided for food intake. But monocultures and the use of toxins destroy and reduce these microorganisms. As a result, less silicon is available in food than in the past. Silicon is a semi-metal, partly with metallic, partly with non-metallic properties. Therefore it is a semiconductor. This made it interesting for electronics and microelectronics, which have been developing since the 1950s.

The miniaturization of electronics in the form of computers, mobile phones, cameras, etc. would not have been possible without silicon. Imagine that: 50 years ago, the amount of data that today fits into a mobile phone would have filled several halls from bottom to top.

In addition to its semi-metallic properties, silicon also has the outstanding property that its atoms combine stably with other elements. This is how, for example, the group of silicones was formed.

These are plastics that are formed by combining silicon with carbon and oxygen atoms. Since the 1940s, more and more silicones have been developed by combining them with other elements. Today, silicones are widely used in technology, household, working environment and medicine - whether as a joint sealant, baking tin, printer roller or breast implant.

Evaluations will be activated after verification.
Colloidal silicon oil