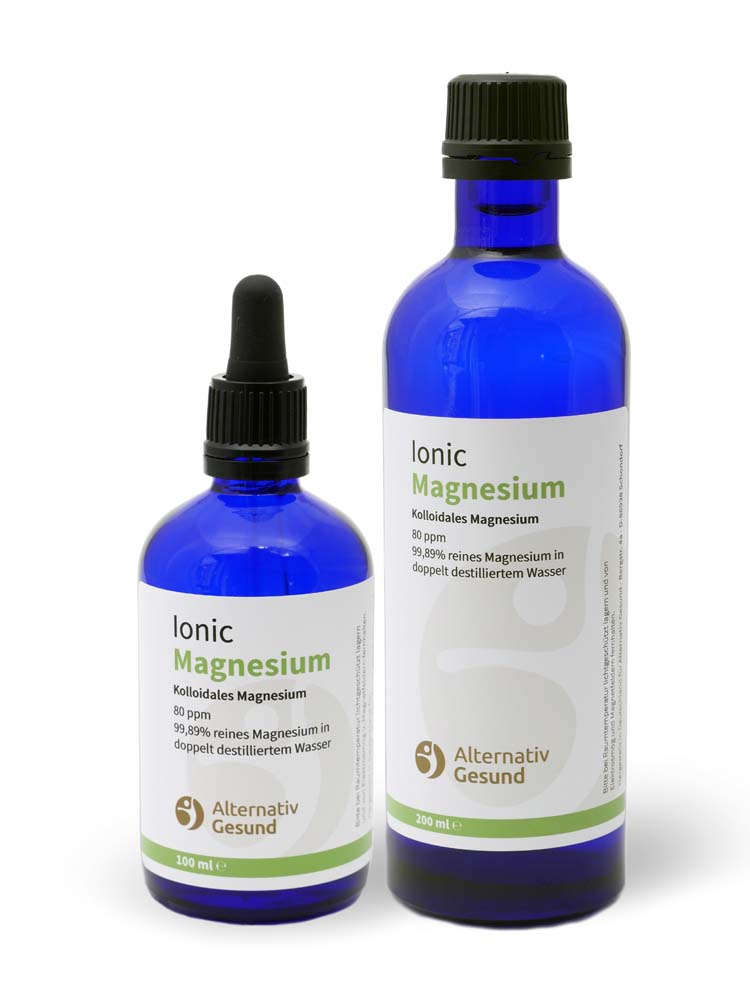 Why magnesium in colloidal form? The soil used to be rich in magnesium. The formation of glaciers during the Ice Age, however, washed out large parts of the metals and minerals found in the soil. Intensive agriculture and monocultures did the rest to reduce the concentrations of precious trace elements in the soil.

In addition, many magnesium-containing foods such as nuts and dried fruits are expensive. And in most cereal products, the husk of the grain is removed. But it is precisely this that contains the most magnesium.

In addition, part of the magnesium that we ingest through food is lost because the bioavailability of digestion is not optimal.

Ideally, magnesium should be taken together with vitamin D, because these two strengthen each other in their effect.

Magnesium in the body

Magnesium is a vital substance for humans and animals alike. The human body contains 20 to 28 g of it. About 60% of it is stored in the skeleton. Around 40% are found in soft tissue (including the skeletal and heart muscles, liver, intestines, thyroid gland and kidneys). The daily requirement of an adult is about 300-400mg.

Magnesium gives our muscles power AND has the task to relax them - as a counterpart to calcium. In the muscles, the magnesium content is seven times as high as that of calcium.

The most important enzymatic processes take place in the presence of magnesium. More than 600 enzymes are activated by magnesium. This mineral thus controls a large part of all chemical reactions in the body that are initiated by enzymes. Magnesium is therefore involved in an extremely large number of metabolic processes, including ATP production in the cells, which gives us the energy to live.

Since the body is not able to produce magnesium itself, this important mineral must be supplied. During physical or mental stress, during pregnancy and breastfeeding, in growth phases and with athletes as well as in old age, the requirement is increased.

Magnesium is indispensable for

You can determine whether your body has a magnesium deficiency by analysing the minerals in your blood. The decisive factor, however, is not the magnesium value in the blood, but the magnesium concentration in the cells.

Power in sport through magnesium Athletic fitness is the basis for health and well-being. Those who exercise regularly get their cardiovascular system up to speed, strengthen their immune system and increase their performance permanently. However, every form of physical activity also poses a challenge to the metabolism.

Only those who supply their bodies sufficiently with all vital nutrients achieve the desired fitness. A particularly important role is played by the supply of the mineral magnesium for people active in sports. Magnesium regulates the interaction of nerves and muscles and thus enables muscle contraction. Every form of physical activity therefore depends on a sufficient supply of magnesium.

The first signs of an undersupply are muscle tremors and cramps in the calves, which are so feared by competitive athletes. Endurance athletes in particular have an increased need for magnesium and fluid. Their lack can lead to circulatory weakness.

A vicious circle can develop between stress and magnesium. Under greater mental and spiritual stress, the magnesium in the cells decreases more and more, which at the same time leads to an increased stress reaction. When people react overanxiously or nervously to challenges and stress, they may lack magnesium.

Magnesium ensures a good oxygen supply to the heart and can lower high blood pressure. In addition, magnesium makes the blood thinner and allows it to flow better through the veins. Even a small magnesium deficiency can have a negative effect on your heart. These effects make it an important factor in the treatment of cardiac rhythm disorders and the prevention of arteriosclerosis and heart attacks.

Magnesium reduces the risk of diabetes because it is important for the transport of sugar in the body and for the functioning of insulin. Magnesium improves sugar utilization and thus leads to a lower insulin requirement.

Magnesium, zinc and chromium are an optimal combination for the prevention of diabetes. Zinc is needed to store and produce insulin. It also improves the effect of insulin in the cell.

Magnesium helps you sleep better. The reason: It calms and relaxes the muscles. In most cases, muscle tension is the cause of sleep problems. Take magnesium one hour before falling asleep, until the sleep problems have completely disappeared. With 2.5% magnesium (Mg) is the eighth most common element in the earth's crust. It is contained in rock, seawater, groundwater and surface water in varying concentrations. Magnesium is widespread in the plant kingdom. It is an important building block for the cell function of plants, especially for chlorophyll formation.

Chlorophyll, on the other hand, the leaf green, incorporates carbon from the carbon dioxide in the air into the plant cell with the aid of sunlight, thus ensuring the plant's survival.

Evaluations will be activated after verification.
Colloidal Magnesium Oil